This is our first update in ages!

We played in Rochester and at Southsea Fest last weekend, both gigs were a lot of fun so thanks for everyone who came to see us play and to Suze, Joe, El and Tim for putting on the shows! These were our first shows in a couple of months as we’ve been working on new material over the summer. We’ve got one new song completed called “Send in the Clowns”, which was debuted this weekend.

We’ve got a few shows coming up which are as follows:

We’re also hoping to book some shows north or west of London between 21st and 25th November, so if you live in or around Cardiff, Bristol, Birmingham, Derby, Nottingham or Leeds and you can sort a show, please get in touch!
Posted by Unknown at 13:01 No comments:

We've got some shows coming up:

We're really looking forward to playing Southsea fest, we're right at the bottom of the poster in tiniest writing but we're going to make up for that by playing really loud and really fast. 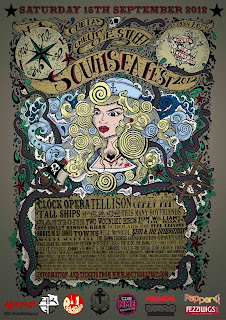 We recently played the amazing This is DIY venue at V22 in Bermondsey, you can hear some of our set along with us talking nonsense to the very nice people who run the radio station at V22.

We've picked up writing our album again after ages as we have been so busy, we hoping to record this by the end of the year.

We'd really like to play some shows up north so if anyone is able to put us on please get in contact, because like every sane person we'll be avoiding London like the plague while the Olympics is on.

Here is a video of us playing a new song of ours 'Barnstormer' in Paris on our recent tour.

Tour over and blog up!

We have just returned from our 2 week tour in France and Germany, and what an absolute amazing time we had. We kept a tour diary of our adventures which is all up for reading now. http://omtdtourdiary.blogspot.co.uk/
Posted by Unknown at 21:29 No comments:

We have been hard at work writing new songs and trying to book our tour in May. We have nearly managed to fill up every day of our 2 week tour. It was our intention to branch out further afield, but as it works out we are spending most of our time in and with many new people and places. We are pumped and we might do a tour diary.

14th @ Le Grand Wazoo,
15th @ Reims, France
16th @ Le Caveau du Grand Sauvoy, Nancy, France
17th @ Up and Down bar, Montpellier, France
18th @ Le Petit London, Toulouse, France
19th @ Central Park, Bergerac, France
20th @ Caen, France
21st @ Paris, France
** 22nd @ BOOK US! Belguim / France / Holland / Germany **
23rd @ Knochenbox, Berlin, Germany
24th @ Postdam, Germany
25th @ Leipzig, Germany
26th @ Under a bridge, Metz, France
--
We have a few shows coming up in April before our tour:
6th @ The Carpenters Arms, Rochester w/ Theo
7th @ The Willmington Arms, Islington, London
14th @ South Street Art Centre, Reading
--
We are now just a few songs away from finishing our second album. As with new songs you always feel they are better than your last 'new songs,' but we are pushing ourselves harder than we've previously managed and are excited how the new stuff is coming together.
--
We will definitely be doing a collaboration with LADYSCRAPER - we just need to work out the day to do it.
--
We were kindly asked to be on a few compilations recently - more information on these when we have it.
--
As always, we are looking for shows anywhere old and new. So please get in touch if you'd have us over to play!
--
That just about sums it up for now.
Cheers!
Mike & Sam
Posted by Unknown at 04:59 No comments:

We've booked a couple more London shows, we love playing in London but really want to start playing other places.  Please get in touch if you can help us out.  We're also going to be going back to Europe in May (12th-26) so please get in contact if you can help us out with a show.  We've got a couple of new songs that we've played at our last few shows.  One is a slower song called 'Oh, my sorry bones' and the other one is a loud fast one called 'Barnstormer', they will both appear on our second album once we have finished writing it.
Posted by Unknown at 17:08 No comments:

So here we are in 2012. Our first show is this Saturday in Camden, London @ The Black Heart. It's an afternoon to evening affair with about 8 bands playing also.

We've got a few more gigs lined up this month and after that covering more of Camden and down in Portsmouth.